On Monday Apple AAPL -0.02% released iOS 11.2.2, its most important update for some time, but it seems in the rush to upgrade some users are encountering a very nasty surprise indeed… 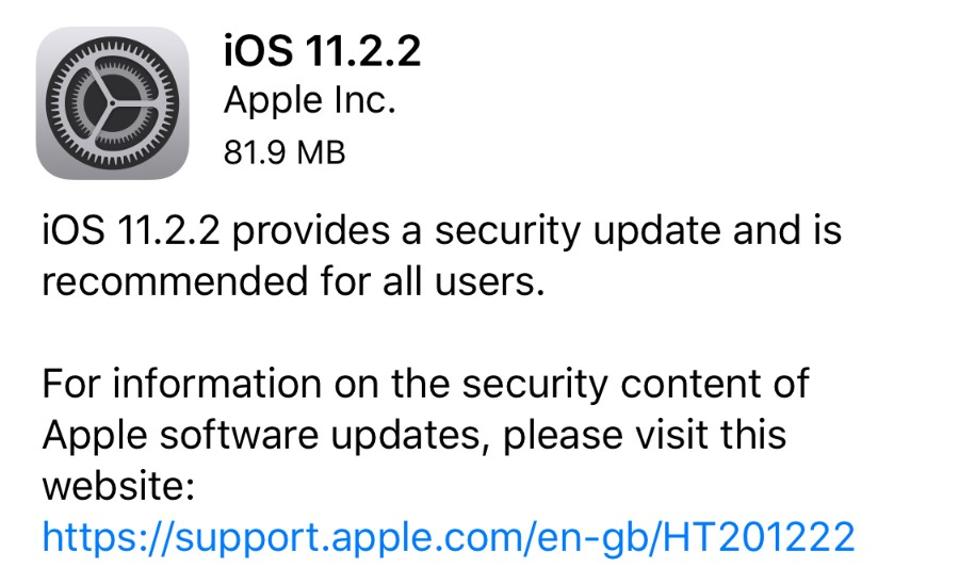 ‘Great Secret Features’ and ‘Nasty Surprises’ are my regular columns investigating the best features / biggest problems hidden behind the headlines.

In fairness to Apple AAPL -0.02%, this one was necessary. After months of badly rushed (and problematic) iOS updates, the release of iOS 11.2.2 is timely because it addresses a serious vulnerability on iPhones, iPads and iPod touch. But does iOS 11.2.2 cause any new problems which mean you shouldn’t upgrade?

For our customers’ protection, Apple doesn’t disclose, discuss, or confirm security issues until an investigation has occurred and patches or releases are available. Recent releases are listed on the Apple security updates page.

Just like previous iOS 11 releases, iOS 11.2.2 is compatible with the iPhone 5S or later, iPad mini 2 or later and 6th generation iPod touch or later.

You should be prompted to install iOS 11.2.2 automatically, but if this hasn’t happened you can trigger it manually by navigating to Settings > General > Software Update. Apple iOS beta testers, remember you may have to unenroll your device for the update to appear – especially if you are running the mysterious iOS 11.2.5 beta.

iOS updates vary in size (features/patches apply to different devices) but iOS 11.2.2 isn’t a big update at roughly 60-85MB. Be aware that if you are still running iOS 10, then iOS 11.2.2 will also roll up the large iOS 11 update into a single major update causing it to weigh in at several gigabytes.

Across over 30 single-core and multi-core benchmarks, Mughal found single-core and multi-core performance of his iPhone 6 fell by an average of 41% and 39% after updating to iOS 11.2.2. The results are broken down on his blog. It is worth pointing out Mughal upgrade to iOS 11.2.2 from iOS 11.1.2 not iOS 11.2.1, but that shouldn’t be relevant as the throttling Apple introduced in iOS 11.2 was specifically for the iPhone 7 only.

iPhone performance before and after updating to iOS 11.2.2

Instead the obvious finger to point is at the sole feature of iOS 11.2.2: mitigations for the serious Spectre vulnerability which is impacting just about every platform around the world. Apple even warned users in advance the patch could have a performance impact in some situations, but said it was not expected to be higher than 2.5% in any situation. So are the big drops the consequence of an error in these mitigations or a problem elsewhere in the update?