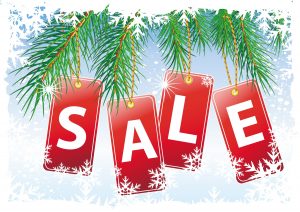 Tomorrow a record £1million-a-minute is expected to be spent amid 88 per cent discounts.

A record £895million is expected to be spent online on Christmas Day online sales & Deals – up 11 per cent on last year – as sales start today or tomorrow online, according to a Centre for Retail Research study for VoucherCodes, based on interviews with 80 major UK retailers and 1,000 shoppers.

Store spending on Christmas Day is set to pass £105million as 1.5million shoppers spend at a record number of convenience stores and garages opening on December 25.

Christmas Day online spending will peak at 10am as cash gifts and vouchers are opened, and 6pm before big evening TV shows, experts say.

Professor Joshua Bamfield, director of the Centre for Retail Research, said: ‘It looks like the first ever £1billion Christmas Day. The day is getting stronger every year for online spending.

ARGOS, Amazon and Currys DEALS REVEALED: Best prices for Echo speakers, MacBook laptops and consoles including the the Nintendo Switch. Here’s all the biggest and best offers ahead of Christmas.

Christmas is just a couple days away and, if you are looking for some last minute gifts, there’s plenty of decent deals on the high street.

All the major retailers including Amazon, Argos and Currys have slashed prices ahead of the festive period with a swathe of deals on top technology and gaming.

Other bargains include discounts on Sonos speakers, Surface tablets, the Google Home and Fitbit fitness trackers.

Gamers can also pick up Xbox, PlayStation and Nintendo Switch consoles from under £200 – some of the lowest prices ever.

So, if you’re after a last-minute bargain here’s all the best deals from Argos, Currys and Amazon.

PS4 owners can grab big savings on hundreds of games and DLC as part of Sony’s PlayStation Christmas sale.

Sony has slashed the price of more than 500 games and add-ons across the PS4, PS3 and PlayStation Vita.

PS4 owners can also make big savings on the likes of Persona 5, Call of Duty WW2 and GTA 5.

The sale ends on January 19, although some offers will expire earlier.

The PS Plus January 2018 games lineup will be available to download a week later on January 2.

There’s no word on what will headline the January 2018 PS Plus lineup, although games often leak before the big announcement.