No Hardware Announcement expected at WWDC 2018 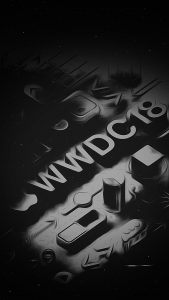 The company is working on refreshes to the MacBook Pro and 12-inch MacBook with new Intel Corp. chips, and is planning a new low-cost laptop to succeed MacBook Air. But those won’t be ready until later this year, according to people familiar with the plans. Apple is also working on a redesigned iPad Pro line with Face ID, but that’s also expected later.

So Apple plan on unveiling next week instead of new hardware?

New augmented reality tools, for one. Bloomberg believes Apple will announce “ARKit 2.0,” which will add the ability for users to play AR games against each other in the same virtual environment.

Another mode allows objects to be dropped into an area and virtually remain in place. The features will be a prelude of what’s to come from an Apple AR headset planned for as early as 2020.

Apple could also announce a new initiative dubbed Digital Health, which is a series of tools to help you monitor how much time you spend on your devices and inside of individual applications.

We need to have tools and data to allow us to understand how we consume digital media. We need to get finer-grain language and start to understand that an iPhone is just a refrigerator, it’s not the addiction.

As a reminder, the WWDC keynote address begins on Monday, June 4, beginning at 10 a.m. PDT. As usual, iDB will provide full coverage of the event.

At WWDC 2018 Main Major thing is the Update of IOS 12 for iPhone , iPad , Watch , iMac , iMac Pro with the Mac OS 10.14 You can Also get Mac 10.13.5 Beta Right Now for you Mac by just downloading a Profile Package and after the successful installation you will be able to download MacOS 10.13.5.

Add WWDC 2018 In Your Calendar